Ward Hadaway Executive Partner John Murray shares his thoughts on this year's ninth Yorkshire Fastest 50 Awards and identifies sectors which are key to the economic growth of the region. 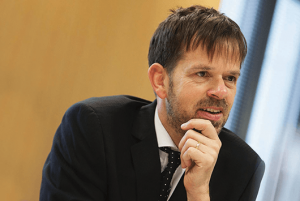 In the run-up to our Fastest 50 awards event, we have been championing the sectors which have appeared in this year’s list.

In partnership with The Yorkshire Post, we have highlighted stories of innovation in the Recruitment sector, skills development in Tech and Digital, increased productivity within the Food and Drink and Manufacturing sectors and highlighted what business leaders today want from the world of property.

Being part of a successful, growing Northern economy is vital to the ongoing success of Yorkshire because it’s the place in which we all live and work. It also sends a positive message to those outside of the region about Yorkshire as a place to come and do business.

And our large and overall winner of the 2019 Ward Hadaway Yorkshire Fastest 50 Awards, Torsion Group, will no doubt reap the benefits as Leeds continues to grow and expand.

The Leeds-based independent development and construction company, which builds student accommodation, care homes and housing, also has offices in Manchester and Coventry. It has capitalised on the opportunities within the sector to deliver grow of 95.39%.

2019 marks an exciting time in Torsion Group’s growth strategy with a pipeline of projects and expanding development opportunities for both the homes and accommodation businesses on the horizon.

Established in March 2015, the company has expanded across other regions and have offices in the Yorkshire, Midlands and the North West and employ a team of more than 80.

Alongside the construction business, Torsion Homes, Torsion Developments, Torsion Engineering and Torsion Care were launched under the umbrella brand to fill a unique gap in each sector. The forecasted turnover for Group companies in 2019 is circa £124.5m.

Runners-up to Torsion Group in the fastest-growing large business category are Halifax-based JBG Holdings Limited, a holding company for a number of Cash Convertor franchises throughout the North of England, and Portland Investment Group.

When it comes to the winner of the fastest-growing medium-sized business award, there is no surprise that it is a food company as Yorkshire is now the UK’s biggest food-producing region – home to more than 15,000 food and drink companies, which employ 18% of the workforce.

HECK ! is based at a farm in Kirklington where the team produce a range of sausages and burgers sold in supermarkets and via their own online shop.

Yorkshire-based HECK ! is thriving under family leadership since the Keebles started their business five years ago at the kitchen table of their farm in Berryhills. One of the only independents in the British sausage industry, the award-winning food producer has grown at a phenomenal pace ever since.

Taking its name from the family motto ‘what the heck’, the gourmet food company was founded by husband and wife team Andrew and Debbie Keeble and three of their children, Jamie, Ellie and Roddy in 2013.

Now with a team of more than 130 staff, many of whom are from Europe and have an average age of 25, sales have grown substantially a year and its products are now stocked in all of the major supermarkets.

The firm produces millions of pork, chicken and vegan balls, bangers and burgers a week, on target to turnover £30 million in 2019. The company is currently driving product innovation to improve efficiency and reduce waste.

The company’s win in the Fastest 50 recognises its place as a leading light in the food and drink sector. Runners-up in this category include SDH Project Services Ltd in second place and Ultimate (Commercial Interiors) Ltd in third.

With Yorkshire’s Property sector also flourishing, this year’s fastest-growing small business is Woodhouse (Lund) Ltd. Having made its mark in the bespoke property world, the family-run business is headed by Jonathan Walker and builds properties across East Yorkshire.

The company was founded by Jonathan in 2009 with the aim to build bespoke houses in and around local villages, within easy reach of Lund, where they knew the value of land and where they were confident in the finished product.

This has proved a successful and consistent recipe for success. To date the company now has a constant list of people from current to new customers wishing to buy conversions and new-build properties. Jonathan and the team are currently working on two new-builds in Goodmanham near Market Weighton and three barn conversions in a small hamlet Towthorpe, near Malton, having just finished two other properties in Beverley.

The company is also about to embark on a rural office development for a large local food supplier. The aim is to constantly improve turnover whilst maintaining profitability.

It is encouraging to see a property-related business making its presence felt in this year’s list because as we leave the EU, the UK needs to attract investment to build the offices, houses and industrial facilities we need to support economic growth.

Yorkshire has also seen an explosion of tech start-ups and is now the fastest-growing digital sector in the UK outside of London. It is now recognised as a leading centre of excellence in the digital and new media industries.

It is a sector that we are delighted to support through our sponsorship of the annual Leeds Digital Festival which we have done for the past three years. That’s why it’s great to see companies such as Sheffield-based Azzure IT in the list once again. The company has won the fastest growing small company award in both 2017 and 2018.

The BTL Group Ltd is also featured in this year’s list. Founded in 1985, the company puts its success down to its innovative approach to technological development. It has now grown into a global provider of assessment technology.

Sheffield-based r2c Online in the 2019 list is another company with technology at its core. The fleet software company was founded in 2003 and has built a team of industry IT specialists from the automotive sector.

Times have clearly changed since we arrived in Leeds in 2008. We’re very proud that our firm has developed at such a rate, and that we count regional, national and international businesses of all sizes among our client base, as well as working across the public sector.

Our Fastest 50 awards reflect the firm’s commitment to businesses of all types, from the smaller owner-managed companies to larger well-established ones across a variety of different industries.

Which leads us to ask, which Fastest 50 companies will we see in next year’s list? What other sectors will we see in our Fastest 50 of the future? Will ‘big data’ ‘Industry 4.0’ and AI still be hot topics or will they be the norm by then? We will have to wait and see.

John Murray is Executive Partner in the Leeds office at Ward Hadaway. He can be contacted at john.murray@wardhadaway.com or on 0113 205 6670.