Representatives from the region's business community will come together this month (23rd January) to discuss the future of exporting after Brexit at a presentation and panel discussion hosted by Ward Hadaway. 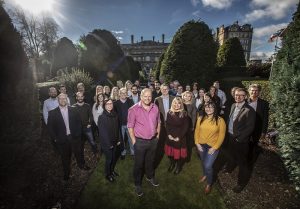 The Top 100 law firm will be joined by representatives from the Confederation of British Industry, the North East England Chamber of Commerce, the North East LEP, NOF and Barclays Bank.

Held at the offices of Ward Hadaway in Newcastle, the event has been organised to update businesses in the North East on a range of potential Brexit outcomes, the potential consequences to the regional economy and help them to make contingency plans so they are ready to respond once we emerge from the current uncertainty.

The panel will consider the impact on exporting, international trade and the regional economy following Parliament’s decision on Theresa May’s Brexit deal, as well as reflecting on the new relationship with Europe.

Julie Underwood of the North East England Chamber of Commerce said that while Brexit continues to be a major challenge for the North East, trade missions to Boston and Shanghai have already secured business.

She said: “Since April last year, businesses working with the Department for International Trade in the North East have secured over 300 export orders in markets outside the EU, with a forecast value of £370 million over the next five years. Also, as part of the North East-led trade mission programme, 35 businesses from across the North took part in missions to Boston and Shanghai, with some already securing business. Such missions are incredibly successful.”

George Rafferty, Chief Executive at NOF Energy, added that as the energy sector is one of the UK’s significant export success stories, it is important companies continue to trade with customers in Europe as simply and as smoothly as possible.

“As the energy sector is a truly global industry and UK companies, such as those in the NOF Energy membership, export around the world, any new trade deals could also benefit them and the countries that are keen on utilising British technology-led products and services.”

While businesses are rightly thinking about the impact of Brexit on their international operations, Will McGarrigle, Senior Policy Advisor at the Confederation of British Industry (CBI) said it’s also important to consider new markets as companies reassess whether their customers of today will still exist tomorrow.

“The EU is the priority as the UK’s largest trading partner, but there are huge opportunities in high-growth markets around the world that firms can tap into. Exporting is a huge driver of growth, productivity and innovation and now is the time for businesses to develop an international strategy alongside the wide range of support services in the public and private sectors.”

Colin Bell, Business Growth Director at the North East LEP, explained that if we want to see our economy grow and create more and better jobs for the North East, it is essential business confidence remains high.

He said: “This event will help businesses plan and prepare for a range of Brexit outcomes and address some fears and uncertainties many businesses may have about potential changes to exporting and international trade following our planned departure from the European Union.

“In the coming weeks the North East LEP will be publishing its updated Strategic Economic Plan, which outlines how, as a region, we can grow and develop a more productive, inclusive and sustainable economy. It reflects on what’s been achieved to date and how we’re responding to ongoing economic and political changes.”

Colin Hewitt, Head of Ward Hadaway’s 40-strong Commercial team, among the largest in the region, said: “We are delighted to host this event and panel discussion about the impact the UK’s decision to leave the European Union will have on the regional economy and the plans businesses need to refine (if they have them) or put in place.

“The country is currently faced with a wide range of scenarios, from a “no deal” Brexit to a second referendum. Businesses need to keep abreast of the range of potential outcomes, and make contingency plans so they are ready to respond once we emerge from the current uncertainty. Parliament is in disarray but by the 23rd January we should have a clearer picture of where the country is likely to end up.

“It’s our role to ensure businesses have a thorough understanding of the commercial implications that Brexit will have. Ward Hadaway has already published some Brexit clauses for contracts and a Brexit checklist to encourage businesses to be more proactive.  The checklist covers information on HR, cross-border trade, contracts, intellectual property, competition policy and state aid, which can be found on the website https://www.wardhadaway.com/updates/brexit-checklist/

Colin added: “This list means that businesses can be aware of policy, for example leaving the customs union, and will help them to think about their employee contracts and if they are in line with compliance issues. We all have an important role to play in helping the region’s businesses to navigate the future with support and practical solutions.”

“Ultimately, the support on offer to regional businesses will determine their ability to come through the Brexit process better off.”

For more information on attending the event, please email colin.hewitt@wardhadaway.com

Partner | Head of the Commercial Department