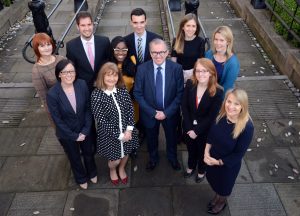 The Top 100 UK firm has been nominated for the Commercial Team of the Year Award at the British Legal Awards.

Organised by industry publication Legal Week, the awards are amongst the most prestigious in the legal sector with firms from across England, Scotland and Wales all competing for the accolades.

Judges for the award state that entries have to outline work which “sets new standards in the delivery of legal services, thereby demonstrating the firm’s market-leading position”.

Ward Hadaway is the only firm based in the North of England to be shortlisted for the award. It is listed alongside City and international legal firms.

Ward Hadaway has been shortlisted for the Commercial Team of the Year Award, reflecting the quality of legal services across a range of specialisms with particular recognition of the role played by the firm’s specialist public sector team advising on the transfer of mental health services in the Vale of York to Tees, Esk and Wear Valleys NHS Foundation Trust.

Melanie Pears, Partner and Head of Public Sector at Ward Hadaway, said: “We are absolutely delighted to have been included on the shortlist for such a prestigious national award.

“The British Legal Awards are widely regarded as recognising firms, teams and individuals at the top of their profession so to be in the running for the Commercial Team of Year Award is a real coup for the firm and for the region for us to represent the quality of service we deliver in the North East on a par with that displayed anywhere else in the country.

“It is a reflection not just of the hard work, expertise and skills of the team here at Ward Hadaway but also of the vision and ambition of Tees, Esk and Wear Valleys NHS Foundation Trust.”

“We’re delighted that the team has been shortlisted for this national award and wish them every success in the final.”

Colin Hewitt, Partner and Head of Commercial at Ward Hadaway, said: “The commercial team here at Ward Hadaway has long been recognised as a jewel in the local legal crown. Melanie and her team are a key part of our offering in the legal market and have consistently demonstrated their status at the cutting edge of the public sector, having led a series of pioneering projects over a number of years.

“It is terrific to see the efforts of the commercial team and their proven ability independently recognised in this way and to see the team take their rightful place amongst the leaders in their sector.”

The shortlisting is the latest in a series of award successes for the public sector team and for Ward Hadaway as a whole.

Earlier this year, the team’s work on ground-breaking and high value transactions involving the public and private sectors saw Ward Hadaway named Corporate & Commercial Team of the Year at the Northern Law Awards 2016.

Ward Hadaway was also named UK Regional Firm of the Year for Real Estate in the Legal 500 UK Awards 2017 and the firm’s Head of Corporate Martin Hulls was named Corporate Lawyer of the Year in the North East Insider Dealmakers Awards 2016.

The firm has also been shortlisted for the Legal Advisors to Education Institutions award in the national Education Investor Awards.

Jamie Martin, Managing Partner at Ward Hadaway, said: “The firm’s recent record of success in national awards speaks volumes for the quality of the services we deliver and the lawyers we train.

“Whilst we are in business to provide legal support and assistance to our clients, it is nevertheless gratifying to receive independent recognition for the quality of the work we do and the ability of the people who deliver those services at the top of their game.

“In the case of awards such as this latest shortlisting in the British Legal Awards, it is also pleasing to be able to demonstrate the quality and capabilities of the North’s legal sector and to underline Ward Hadaway’s status as a Northern law firm for national business.”

The British Legal Awards take place in London on November 24.