Ward Hadaway has been named Corporate/Commercial Team of the Year at the Northern Law Awards 2016.

As a Northern law firm for national business, the firm provides a comprehensive range of services to clients on a regional, national and international basis and is known for the breadth and depth of its corporate and commercial advice.

Ward Hadaway fields a series of specialist teams in the corporate and commercial arena who provide high quality legal services to companies and organisations in the private and public sectors. 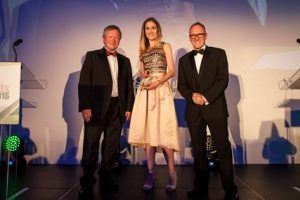 Jenny Wade (centre), Associate in the public sector team at Ward Hadaway, accepts the award for Corporate/Commercial Team of the Year at the Northern Law Awards 2016.

The Corporate/Commercial Team of the Year Award at the Northern Law Awards was won by the firm’s specialist public sector commercial team for its innovative and ground-breaking work on a wide range of pioneering transactions involving the public and private sectors.

Led by Partner Melanie Pears, the team advises a raft of clients across the country from Cumbria to Cornwall on multi-million pound projects, developments and joint ventures in the health, education and local government sectors.

The Northern Law Awards win is the latest in a series of awards which the specialist team has won.

The firm also won PFI Law Firm of the Year in England for 2016 in the Global Law Experts Annual Awards and was named Best Commercial Firm, North England in the Wealth & Finance 2016 Awards.

Melanie Pears, Partner and Head of Public Sector, at Ward Hadaway, said: “We are over the moon to win this latest award, which is a tribute to the hard work, expertise and dedication of our team and to the determination and vision of our clients.

“We always strive to deliver the very best service which we can and it is very gratifying to have this acknowledged with this award.”

Jamie Martin, managing partner at Ward Hadaway, said: “This latest award is a tremendous achievement by the team and acknowledges the leading edge nature of the work which they do for our clients from across the country.

“They are an outstanding team who do complex, specialised work that frequently breaks new ground in the interface between the private and public sectors and that makes a difference to the lives of thousands of people.

“The award is richly deserved and we are very proud to be part of the Northern Law Awards, which do a tremendous job in highlighting and celebrating the excellence of the legal services sector across the region.”

Ward Hadaway recently announced record turnover and profits for the financial year to the end of April 2016.

The Top 100 UK firm, which has offices in Newcastle, Leeds and Manchester, saw annual income rise by 7.2% to a record £35.8m with growth across all of its practice areas and offices.

The growth in income was also matched with a tight control on costs with the firm’s like-for-like profit margin rising to 32.2%.