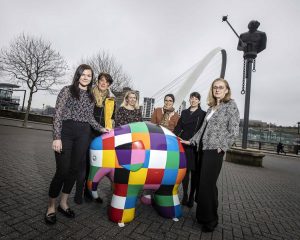 The public art trail will see more than 50 artist-designed giant Elmer sculptures appear across the region between August and November 2019, in support of local charity, St Oswald’s Hospice.

The Ward Hadaway Elmer will be positioned on a plinth at Central Station where it will welcome visitors and commuters to the city.

Speaking about the opportunity to sponsor an Elmer, Corporate Partner Julie Harrison, Head of Ward Hadaway’s CSR Committee, said: “The Elmer trail will be a wonderful opportunity to encourage our people to become active in our region and their community, while also raising essential funds for St Oswald’s Hospice.

“We are particularly excited that our Elmer will be at Central Station, where it will bring a smile to the faces of our people as they commute between our offices in Newcastle, Leeds and Manchester and to visitors to our great region.”

Ward Hadaway’s CSR programme has a strong emphasis on encouraging health and wellbeing in the community.

Last year, 50 members of the Ward Hadaway team took part in a 135-mile relay run between the Manchester, Leeds and Newcastle offices to raise money for charity.

During the third week of Elmer’s Great North Parade which has a health and wellbeing theme, Ward Hadaway’s running group, The Hadaway Harriers will team up for a special event.

Jamie Martin, Senior Partner at Ward Hadaway, added: “Health and wellbeing are really important to our firm and we see the trail as something in which everyone can get involved. Whether it’s at the weekend with their family or on their lunchbreak, everyone has a chance to share their Elmer story via our internal newsletter and on social media.”

Jane Hogan, Elmer’s Great North Parade project lead, added: “We’re delighted to welcome Ward Hadaway on board as a sponsor of Elmer, and it’s great they have come up with an exciting way of getting involved in this magical event for the city.

“We hope it will encourage even more visitors to the region and to the trail, which in turn will benefit all of our Elmer sponsors and ultimately the Hospice.”

Artists for the trail will be commissioned to design each of the Elmers, ensuring a unique identity for each one.

The sculptures, inspired by Elmer the Patchwork Elephant, will then be auctioned off after the trail and all proceeds will go to St Oswald’s Children’s Hospice.

The idea follows in the footsteps of similar projects run by Wild in Art in other cities and is expected to raise thousands for the hospice and attract thousands of people to the region.