Seminar reveals what lies beneath

Seminar reveals what lies beneath

THE question of who owns the mines and minerals beneath land and the potential for developers being held to ransom over the exercise of such rights is becoming an increasingly important issue for a range of players in the property sector, according to a leading law firm.

Property experts at Ward Hadaway say that attendance and feedback from a recent seminar held on the subject demonstrate how  rights to mines and minerals is a hot topic for developers and land owners alike.

More than 70 representatives from a range of companies and organisations in the property industry attended the Ward Hadaway property team’s event, held at the law firm’s Newcastle office. 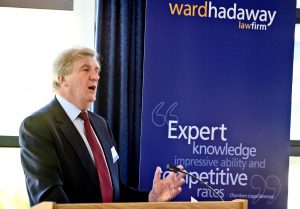 The special guest speaker was Michael Driscoll QC (pictured) of Maitland Chambers, a nationally recognised expert on the subject.

Ward Hadaway Property Partner Alex Cox explained to attendees the options open to developers in preparing and implementing a strategy to deal with the risks posed where mines and minerals are owned by a third party.

Sharon Mathieson, a Partner in the Firm’s Property Litigation team, fielded attendees’ questions about dispute scenarios and the implication of seeking redress through the courts.

Lesley Fairclough, Partner and Head of Development at Ward Hadaway, said: “We know from our work with clients that mines and mineral rights are becoming more of an issue, particularly with the development of the ‘fracking’ industry in the UK, but the attendance and feedback at this seminar illustrated that it is now a really hot topic and is causing a big problem for developers.

“The event proved so popular that we were at maximum capacity for attendees a number of days before the seminar took place. 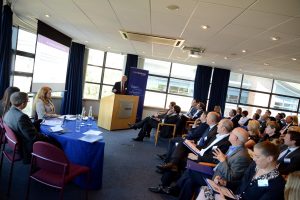 The audience at Ward Hadaway’s mines and minerals seminar.

“As we outlined during the course of the seminar, in addition to being an important issue, mines and mineral rights are not straightforward and negotiating a path through the various legal issues which they create is not an easy task.

“Hopefully those who came along to the event will have gained a good grasp of the essentials at stake, having heard from true experts in the field.

“This is an issue which is certainly not going to go away so I would anticipate that the property team at Ward Hadaway will be receiving further interest and enquiries from professionals and organisations across the industry as they get to grips with the issue and look to advance new development schemes.”

Ward Hadaway has one of the largest specialist property legal teams in the region with more than 70 specialists across the North.

The team was recently named Property Team of the Year in the Northern Law Awards.