Ward Hadaway got involved in the Great Legal Bake this week and added something special to the menu.

We supported the national event by inviting Great British Bake Off contestants to judge the winning entries in our Leeds office.

Howard Middleton and Sandy Docherty, who appeared on the show during series four and series six respectively, presented the winner with a baking themed hamper and trophy at the office in Leeds. 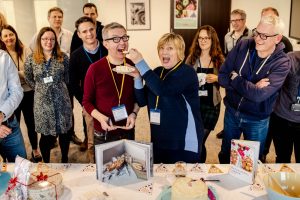 In Newcastle and Manchester, team cake sales were organised across the business. The aim was to bring people together from different departments to catch up and enjoy a conversation over a delicious piece of homemade cake.

The Great Legal Bake was developed by the Access for Justice Foundation and its network of regional Legal Support Trusts. The charity raises funds to provide grants for local legal advice and supports people in need, who have experienced employment, housing and disability injustice.

Christina Kettlewell, an associate at Ward Hadaway in Leeds, said: “It’s vital to raise awareness of the work not-for-profit organisations like the Access for Justice Foundation do, because they provide a lifeline to so many people in need by funding free and accessible legal advice.

“It’s an event we’ve supported before but this year we wanted to do something a little different to help profile the great work of the Foundation as well as raise as much money as possible. The money raised goes to our local branch of the Foundation, directly reaching those in our local communities who need it most.  For example, our funds help smaller charity groups, citizen’s advice bureaus and other support networks that work in court to offer help to those who appear in court without any legal provision.”

Howard Middleton, who now works with Bake With a Legend, where he teaches baking classes around the country, said: “It was great to judge Ward Hadaway’s Great Legal Bake. From the range of entries which included Russian Honey Cake, Peasant Cake and White Chocolate Fudge Cake, it was clear that their legal expertise isn’t the only talent they possess – they have some very keen, and able, bakers among them too. 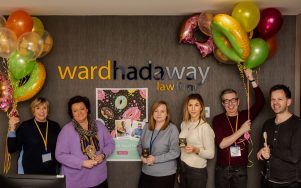 “It was a tough decision, but Sandy and I agreed the Lemon and White Chocolate Drizzle Cake by Lucinda Peters was the overall winner not just for the wonderful presentation of the finished cake but because she nailed the taste and texture so well. Well done, Lucinda. Such a great cause to be involved in.”

For more information about The Great Legal Bake and the Access for Justice Foundation, please visit: https://atjf.org.uk/.