Ward Hadaway has been announced as Barratt David Wilson's Business Partner of the Year for 2018 in the North East at the company's annual dinner. 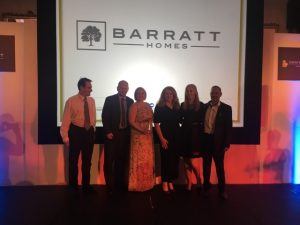 The awards evening, which was held at Hardwick Hall in Sedgefield recently, celebrates the efforts of companies across the region that have supported housebuilder Barratt Developments in the North East, which includes the Barratt Homes and David Wilson Homes brands.

The event commended Barratt’s work with hundreds of its subcontractors throughout the region across a range of disciplines. On the night, many local businesses were in attendance to recognise and celebrate quality workmanship across the North East.

The Barratt David Wilson’s Business Partner of the Year award was given to Ward Hadaway’s Property team. It is the second time in recent years that the team has received the accolade, the last time being in 2014.

Ward Hadaway has worked with Barratt throughout its 30-year history and the housebuilder has been a key client for the firm throughout its existence. The Ward Hadaway team was one of five businesses to be shortlisted for the award and provides legal services relating to acquisitions, the sale of completed new homes and construction contracts, planning and infrastructure agreements.

Scott Martin, North East Managing Director of Barratt Developments, presented Ward Hadaway with the award. He said: “Lesley and the team’s support means a lot to me and it’s always good to have an opportunity to see each other in a more informal setting.”

Lesley said: “We are delighted to have been acknowledged for our long-standing relationship with Barratt David Wilson Homes. It’s great to be recognised for our contribution to Barratt’s success in the region in the same year that the business celebrates its 60th anniversary and we celebrate our 30th.”

Robin Atkin, added: “This award is testament to the hard work and commitment of our property team over many years and we are delighted to receive it.”

Mike Roberts, regional managing director of Barratt Northern, said: “Congratulations to Lesley and the team. I am pleased the division recognised the amount of work that the Ward Hadaway team put in to support the delivery both at the front end of buying land, right through to the plot completion process.

“Sometimes I think it can go unnoticed simply because a lot of it is carried out off-site and out of sight of the Barratt team based either in the office or on the developments.

“A well-deserved award for the team and I would like to say thank you for being such a solid supporter of the division in the North East.”