THE search is hotting up to find Greater Manchester's fastest growing privately-owned companies.

Devised and organised by leading North law firm Ward Hadaway and backed by Greater Manchester Business Week and the Manchester Evening News, the annual awards were started in 2014 and have already proved to be a resounding success.

Last month saw the start of the search to find the 2017 winners and compile the definitive list of the 50 privately-owned profit-making businesses which have seen the biggest annual growth rate in their turnover.

Independent researchers are currently in the middle of crunching the numbers to find the final 50, whose names will be published in A to Z format in Greater Manchester Business Week early next month.

Then on May 19, an awards ceremony will be held where honours will be handed out to the fastest growing small, medium-sized and large businesses.

One of those three winners will then receive the ultimate accolade of being crowned Greater Manchester’s overall fastest growing business for 2017.

Paul Johnson, Executive Partner at Ward Hadaway’s Manchester office, said: “We are already well under way in the research process to compile the Ward Hadaway Greater Manchester Fastest 50 for 2017 and we are seeing some very interesting names in the initial reckoning.

“From what we have seen so far, I think we are in for a terrific Fastest 50 this year which will demonstrate just how vibrant and healthy the region’s economy is and what a wide variety of successful businesses we have here. 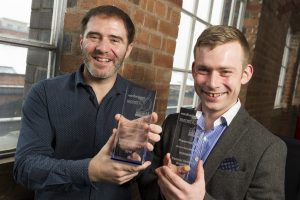 “Previous Ward Hadaway Greater Manchester Fastest 50 Awards have shown the strength in depth, drive and determination to succeed which make this such a great place to do business and I think the 2017 edition will be no exception.

“We are looking forward to continuing the research process ready to reveal the final Fastest 50 for 2017 early next month.”

Ward Hadaway, which also has offices in Leeds and Newcastle, has itself enjoyed considerable growth in recent years.

Jamie Martin, Managing Partner at Ward Hadaway, said: “As a firm, we have enjoyed considerable success in Greater Manchester thanks to the backing of the region’s business community.

“As well as celebrating and championing business achievement, the Ward Hadaway Greater Manchester Fastest 50 is also a way for us as a firm to acknowledge the support we have received from the region and to demonstrate our continuing commitment to Greater Manchester and to growing our practice here.”

The data is then verified before the definitive Fastest 50 list is published in Greater Manchester Business Week.