Renewable energy company Puregas Solutions was the major winner at the 2017 Ward Hadaway Fastest 50 Awards – the 20th in the event’s history. 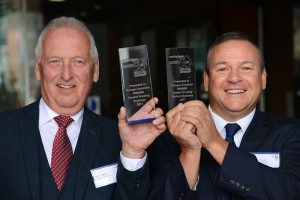 The technology enables the company to upgrade raw biogas to biomethane/Renewable Natural Gas for direct injection into the gas grid, compression for vehicle fuelling (bioCNG) or liquefied to provide bioLNG (liquefied natural gas) – all forms of low carbon fuel.

Steven Scott, sales manager at Puregas Solutions, said: “It’s fantastic to win this award and we are very, very proud.

“We had inkling we had done well but we didn’t expect to have won.”

Director and technical sales manager Tony Hales added: “It’s a very pleasing moment when you see the amount of work that’s gone into the company and the volume of effort that people have made over the years to get where we are is recognised.”

Puregas Solutions is the UK arm of an international group based in Sweden. The group, which also has operations in Denmark and Germany, currently operates more than 30 biogas plants across Europe.

Puregas received its awards at a ceremony at Baltic, the Centre for Contemporary Art, in Gateshead on Friday.

The other winners at the Ward Hadaway Fastest 50 Awards for 2017 were Gateshead’s Benticks Ltd and Stockton-based Transflex Vehicle Rental.

Bentincks specialises in making upholstery furniture as well as upholstered sofas and sofabeds and the company manufactures over 1,000 pieces of furniture every week.

Balal Ali, director of operations at Bentincks, said: “It was a real surprise to win. We were not expecting it because there are so many people in the list and it was nice just to be there and be recognised but to win it is something else.”

Transflex was the runner-up in the fastest growing medium-sized business category in 2016 but went one better this time. The company, which is based in Stockton, specialises in commercial vehicle hire ranging from single vans to multi-site national operators.

Tina Lynas, finance director at Transflex Vehicle Rental, said: “We can’t believe it! We are really thrilled to win. It’s down to a massive team effort from everyone at the company. It’s all down to them and to our customers.”

The winning companies were revealed before an audience of over 300 business leaders, including more than 100 representatives of Fastest 50 companies at the Riverside Terrace at Baltic.

Andrew Hodgson, chief executive of 2009 Fastest 50 overall winner SMD and chair of the North East Local Enterprise Partnership, was the special guest at the event and delivered the keynote speech.

Mr Hodgson talked about how successful businesses are driven by people with a vision and people who want to make a difference. He also stressed how devolution for the region was crucial to its future.

He said: “A North East devolution deal is hugely important. No business person would leave the crucial decisions about their business to be taken by someone hundreds of miles away.”

The Fastest 50 is devised and organised by leading North law firm Ward Hadaway and supported by The Journal.

Colin Hewitt, partner and head of commercial at Ward Hadaway, said: “This was a fitting way to bring up the 20th anniversary of the Fastest 50 Awards.

“As it has done every year since it was started, the Ward Hadaway Fastest 50 has succeeded in highlighting all that is best about business in the North East.

“Not only do we have three fantastic winners of the main awards, but also every company in the Fastest 50 has performed exceptionally well to make it into this year’s list.

“The drive, determination and ability which the 50 companies in the list have demonstrated embody the spirit of enterprise and effort which makes this region so special.

“The record number of attendees at this year’s event also shows what an important fixture the Fastest 50 is in the North East business calendar.”

Graeme Whitfield, business editor of The Journal, introduced the awards, which reward profit-making privately-owned companies and organisations in the region which have shown the strongest annualised sales growth over recent years.

Further coverage of the Fastest 50 for 2017 will feature in a special supplement in Wednesday’s Journal.