A TRAVEL company is moving up another gear after acquiring a second vehicle depot, with the help of law firm Ward Hadaway.

Stanley Travel, which is based in County Durham, has bought the former Arriva bus depot at Morrison Busty in Stanley for an undisclosed sum. 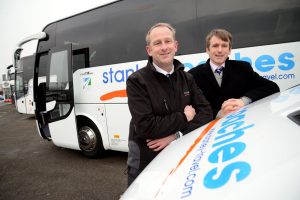 Moving up a gear – (from left) Andrew Scott, director at Stanley Travel with Alex Wright, Property Partner at law firm Ward Hadaway who advised Stanley Travel on its acquisition of a second depot.

The 2.2 acre site is located around a mile from the company’s headquarters and main depot in Stanley and it has been bought to help deal with continued expansion at the business.

The company employs 70 people and provides a wide range of services from short taxi journeys to tours for holiday companies in the UK and Europe.

The new depot will be used to clean, service and fuel the Stanley Travel fleet of buses and coaches and free up additional space at the company’s main Oxhill Farm site.

The acquisition comes as Stanley Travel enjoys the busiest year in its history with rising demand for its range of services.

Ian Scott, director at Stanley Travel, said: “We have had our best year in business this year. Demand is across the board with the holiday coach side and general Private Hire parts of the business growing quickly.

“We have just ordered two more coaches for early 2016 delivery so the acquisition of this new depot comes just at the right time for us. We have outgrown our current depot and we needed some more room. This site became available at the right price so we decided to take it.”

The property team at law firm Ward Hadaway’s Newcastle office provided legal advice to Stanley Travel on the acquisition of the new depot.

Alex said: “We are delighted to have assisted Stanley Travel on the acquisition of the new depot, which will hopefully drive the company to further success.

“It is terrific to be able to play a part in helping a well-established company to continue its growth and progress.”

Ian Scott said: “Alex and the team at Ward Hadaway did a superb job to help us acquire the new depot.

“It was great to have the support of professional advisers who really know the property sector and how it works.”