AN ONLINE motivational tool developed and built in the North East has received a funding boost from the Finance for Business North East Angel Fund.

Stick At It Ltd, which is the brainchild of Darlington-based entrepreneur Diane Morris, has received an investment from the Fund, which is managed by Rivers Capital Partners, who were advised on the deal by law firm Ward Hadaway. 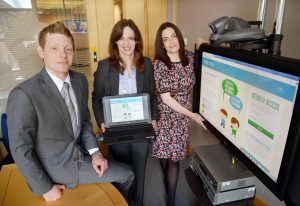 Investment boost – (from left) Nikita Bazko of Rivers Capital Partners, Diane Morris of Stick At It Ltd and Imogen Holland of Ward Hadaway.

Stick At It is designed for people looking to achieve health and fitness goals and aims to act as a 24-hour-a-day motivator to provide encouragement and support.

Users enter details on what they are aiming to achieve and can plot their progress as well as programme reminders, encouraging messages and other prompts to keep their goals in sight.

Founder Diane Morris explained: “Basically it is there for you to act as a support and a friend to keep you motivated and focused on what you want to achieve.

“I have been into motivational training for some time but I found that in the times when people were away from their coaches or sessions and there was no coach or group there supporting them, they tended to lapse into their old habits.

“I realised there was a missing piece in the jigsaw because you can’t be there for someone all the time. Stick At It plugs that gap by acting as a 24-hour virtual motivational coach to keep people focused on their goals so they’re not tempted to lapse.”

The online site has been developed with Newcastle-based web company Big Bad Robot Digital and Diane will use the funding from the Finance for Business North East Angel Fund to roll the system out nationwide.

Diane said: “The investment from the Fund via Rivers Capital Partners has made a big difference to my ability to get the system up and running and we are now looking forward to helping many more people achieve their goals – with a little digital help.”

Nikita Bazko, portfolio manager at Rivers Capital Partners, said: “Stick At It is aimed at a sector with a lot of growth potential as health and fitness is a huge market.

“However, the online system can be used to support users with a range of other life goals, expanding its potential market even further.

“The fact that Diane has used North East web expertise to develop the site means that the investment in Stick At It has already had a multiplier effect in the region’s economy.”

Imogen Holland, Corporate Partner at Ward Hadaway, led the firm’s team advising Rivers Capital Partners on the investment in Stick At It.

Imogen said: “We are delighted to have assisted Rivers Capital Partners on this latest investment from the Finance for Business North East Angel Fund.

“In common with a number of other investments from the Fund which we have advised on, Stick At It uses technology in an innovative way and targets a sector with a lot of growth potential.”

Ward Hadaway has previously advised Rivers Capital Partners on over 30 investments from the Finance for Business North East Angel Fund.

The Finance for Business North East Angel Fund invests in start-ups and existing businesses with growth potential in the region.

It forms part of the £125m Finance for Business North East investment fund established to provide debt and equity funding to SMEs based in North East England.