Established in 2015, Torsion Group has expanded across other regions and now has offices in Yorkshire, the Midlands and the North West and employs more than 80 people. 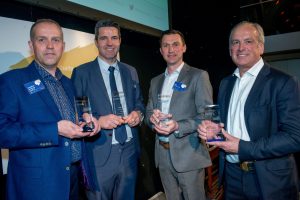 The winners of Ward Hadaway’s Yorkshire Fastest 50 awards at Aspire in Leeds.

Alongside it, Torsion Homes, Torsion Developments, Torsion Engineering and Torsion Care were launched under the umbrella brand to fill a gap in each sector.

It rose to the top of this year’s list of fast-growing businesses with an average turnover growth of 95.4%. The Group is forecasted to turnover £124.5m in 2019.

Dan Spencer, CEO of Torsion Group, said: “We are absolutely delighted to have won the fastest growing business in Yorkshire, especially given the stiff and high quality competition from our fellow Yorkshire businesses!

“It is great recognition for the journey we have made over the last four years. It goes without saying that we wouldn’t be where we are today if it wasn’t for our dedicated and hard-working employees who had faith in my vision from day one and who have grown in number from four to 88.

“The support from our loyal supply chain, and their subsequent reward, has made this journey and recognition all the more satisfying. We have further expansion plans with a number of key Yorkshire developments in the planning phase, and as they move closer to delivery we will continue with our planned profitable growth plans with an increase of a further 30% in 2019 and another 14 roles to be created.”

Torsion Group won the Fastest Growing Large Business Award – for companies with an annual turnover of more than £25m – ahead of JGB Holdings Ltd in second place and Portland Investment Group in third.

Torsion Group was not the only winner at the awards, organised by Top 100 UK law firm Ward Hadaway and supported by The Yorkshire Post.

Bedale-based HECK!, won the award for the Fastest Growing Medium-Sized Business, for companies with an annual turnover of between £7.5m and £25m.

The family-owned business is thriving since it was set up five years ago. With a team of more than 130 people, the company is on target to turnover £30m in 2019.

Founder Andrew Keeble, said: “It is absolutely fantastic to win this award. We started out on our journey all those years ago at the kitchen table, so this award means a huge amount. Everyone in the business will be delighted about this.

“We are proud to be a Yorkshire family and friends business and our growth means we can give back more to our local community and other businesses. We open our doors to lots of different groups in the community. We have also launched an entrepreneurial scheme to help local food businesses take their idea and work alongside our team to bring it to market.”

With regards to Brexit, Andrew said: “It is companies like ours that will continue to grow the economy and create jobs, Brexit or no Brexit, and we are excited about taking HECK ! to the world with our ambitious export plans. We are launching in Germany, Holland and Australia in the next three months.”

Woodhouse (Lund) Ltd was named the Fastest Growing Small Business in the category for companies with an annual turnover of between £1m and £7.5m.

The company was founded by Jonathan Walker in 2009 with the aim to build bespoke homes in and around local villages, within easy reach of Lund.

Jonathan said: “To win in the Yorkshire Fastest 50 Awards is a great achievement. I feel humbled. I can’t believe what we have achieved in the last few years. As the speaker said you go through times, you wake up sweating in the night about money, but it all comes right in the end if you keep doing it.

“We cannot believe that we have won this award. This is going to spur me on to try and do even more and do even better.”

The winning companies and runners up were revealed before an audience of 300 people, including Fastest 50 company representatives and Yorkshire business leaders, at Aspire in Leeds on Friday, March 22nd.

Ward Hadaway Partner Philip Jordan talked about the firm’s involvement in the Awards, Brexit and about Ward Hadaway’s growth in Yorkshire.

In his speech, Richard spoke of how business is about mistakes, not just about successes. He acknowledged the rollercoaster ride that entrepreneurs like those in this year’s Yorkshire Fastest 50 list, go through to reach the top, before moving on to talk about his own journey.

He said: “You don’t realise how many times you nearly go bust, waking up in pools of sweat from the stress of growing that business and nearly getting it wrong. Everyone in this room knows what it feels like. You know what it feels like to have the house on the line, the kids’ schooling on the line and everyone deserves credit for going on that journey.”

He pointed towards social media as causing considerable change in culture and society.

“Everyone these days looks at social media and sees perfect lives. We do have great lives when it works, but what they don’t appreciate is how hard it is to get there and the pain and suffering that you go through. I haven’t met many entrepreneurs who haven’t been on that journey and it is remarkably personal, but everyone goes through it, no matter how successful you become.”

He added that any great business is about a team of exceptional people, but it’s also about the one person at the top who drives it.

He said: “It’s their ambition and their hunger and their greed because a business isn’t a democracy, it’s a dictatorship to get it right. You have to surround yourself with good people, but any decision is better than no decision in business and you learn that by making no decision and then realising you should have made a decision earlier.”

Richard also hinted at his background as being one of the reasons for his success.

He said: “I’ve been driven by a fear of failure and that’s because I didn’t do very well at school and therefore I wasn’t an accountant, I wasn’t a lawyer, so I had no professional qualifications to fall back on and therefore I have hunger.

“The only thing you can’t teach people is hunger and I don’t know where it comes from or why people have hunger. What I do know is that to be successful you need a strong family around you generally because you can’t have problems at home and be good in business. You need good friends who support you through the good and bad times.

“I’m very fortunate that I love my job and I love going to work because I get to meet many companies each day and I get to help them reposition themselves and maximise the upside.”

He then went on to talk about the tech scene in the UK.

“The tech companies we are seeing now are off the scale. It’s massively rewarding to see these UK technology companies become world leaders.”

Richard ended his speech with a few words of advice for the Fastest 50 businesses in the room.

He said: “Whether you’re first in the list or 1000th in the list, it really doesn’t matter it’s still a phenomenal achievement that comes at a great sacrifice, so please enjoy the journey.

“Today is about recognising success, rewarding the people who are successful and everyone in the room should take great pride in what they have achieved.”

Jamie Martin, Senior Partner at event organiser Ward Hadaway said: “This is the ninth time which we have held these awards and they never fail to be inspiring occasions that bring out the best in Yorkshire’s businesses. It’s great to see so many companies driving the region’s economy forwards.”