Three keen crafters from Ward Hadaway's Real Estate team have created hundreds of poppies to mark 100 years since the end of the First World War. 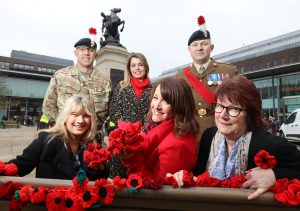 Property secretaries Janine Bolan, Jayne Payne and Andree Courage crafted the commemorative creations during their lunch breaks and after work on a monthly basis over the course of the last six months.

Janine, whose son Glen was in the Armed Forces, said she wanted to do something special for the Royal British Legion’s annual appeal and marks the centenary of the Armistice.

She said: “The idea was inspired by the 100th year and our target was initially only 10 poppies to give them to other members of the team for a small donation.”

Jayne added: “Then we heard about the Newcastle City Council Poppy Appeal and decided to “go for it”. This kick- started our monthly “Poppy-athon” crochet and knitting nights/lunchtimes. We’ve thoroughly enjoyed making the poppies and are proud to be part of such a fitting tribute to those heroes who lost their lives in the First World War.”

Andree said: “It was a pleasure to spend leisure time (eating, drinking and crocheting/knitting) for this special occasion with friends from my work team.  I always wear my poppy with pride, but this year with our very own creation is an even prouder moment.”

He said: “We would like to thank Janine, Jayne and Andree for their sterling efforts in creating these poppies in what is probably the most important year for the Poppy Appeal because it also recognises the centenary of the Armistice.”

War memorials across the city were decorated earlier this week with the creations ahead of special Remembrance ceremonies and parades which will take place across the region.

“The display of knitted Poppies in Newcastle is a wonderful way of showing how the City is coming together to say ‘Thank You’ to the First World War generation.”

Cllr Kim McGuinness, cabinet member for culture, sport and public health, at Newcastle City Council, added: “100 years on from the end of the war is a momentous milestone.

“It is only right that as a city we come together to pay our respects to those that fought for all of us and our future. The yarn poppies are an easy and inclusive way for anyone to get involved and to create a fantastic display for the commemoration in the heart of Newcastle.”