Ward Hadaway recruits shortlisted in The Made In Manchester Awards 2018

A trainee and an apprentice from Ward Hadaway have been shortlisted for top industry awards which showcase the best of Manchester's young business talent. 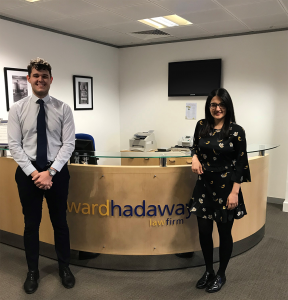 The two young recruits, Mona Mojtabavi and Danny Costello, will now go forward to the final of the Made In Manchester Awards 2018 in February where the winners will be announced at a prize-giving ceremony at The Hilton Hotel in Deansgate, Manchester.

Danny, 21, has been with Ward Hadaway for three years having initially started off as an Administration Assistant before securing an apprenticeship and moving to the Property team two years ago at the Manchester office.

He said: “I am very grateful to be shortlisted for a Made In Manchester award and see it as a huge honour to have been nominated by my fellow colleagues. I’m also hugely proud to be one of Ward Hadaway’s legal apprentices.

Mona has been with Ward Hadaway for just over a year and views securing a training contract with the firm as one of her ‘greatest achievements’ to date.

She added: “I chose Manchester as the city is vibrant and diverse and I started my training contract at Ward Hadaway’s Manchester office in September 2016. So far, I have undertaken seats in Corporate and Employment and I am currently working with the Commercial Litigation team.

“With less than a year of my training contract left, I am enjoying the opportunity to get to grips with a range of practice areas whilst making a positive impact on behalf of the firm.

“I am extremely happy and excited to have been shortlisted for the Graduate of the Year in the Made In Manchester Awards.”

Organised by Future Pro-Manchester, the annual awards are now in their 6th year and include a category which recognises businesses like Ward Hadaway that are committed to growing young talent through apprenticeships.

Paul Johnson, Corporate partner at Ward Hadaway and Executive Partner for the firm’s Manchester office, said: “Recruiting bright, enthusiastic and promising young people is important to us. The value of playing a part in Mona and Dan’s development cannot be understated. We are so pleased for both of them and all they have achieved so far in their time with us at Ward Hadaway in Manchester.

“Being shortlisted is testament to their hard work and determination. We know they will both do well in their careers and will continue to make invaluable contributions to Ward Hadaway. We wish them all the best for the final in February.”