The annual awards ceremony, which took place in London, saw a range of UK leading law firms competing across a number of categories.

Ward Hadaway was the only North East headquartered firm to be recognised at the prestigious event. 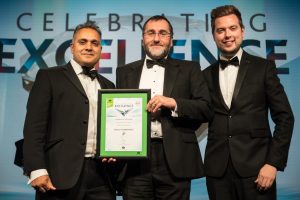 The firm was ‘Highly Commended’ in the Excellence In Technology award category which celebrates the innovative use of technology in delivering services for clients. Judges acknowledged the firm for its unique market-leading planning service for developers.

The visual Title Overlay Plan (TOP) service helps developers, particularly housebuilders, identify and understand problems and constraints with new sites they are looking to acquire and develop at an early stage.

Kamran Hyder, Planning Partner at Ward Hadaway, said: “On many land transactions, it is not instantly apparent from a study of plans or documents where potential issues may arise. For example, there could be gaps in land ownership, routes of existing services or adopted highways to consider.

“The innovative TOP service uses an Ordnance Survey Plan as its base and overlays it with other information, including a Google Earth satellite image, adopted highways, red line site boundary, Land Registry title plans as well as routes of existing services and any other likely constraints.

“It means a TOP can be produced extremely quickly.”

Neil Milburn, Development Director at Barratt Homes, said: “For many years we have used the Title Overlay Plan service (TOP) provided by Ward Hadaway’s Plan Technicians and it has proved extremely useful in providing and bringing forward vital information at an early stage in the site/project appraisal process.

“The TOP service is invaluable to us and our professional teams including architects and engineers and has helped us save money and manage risk.”

Commenting on the award win, Kamran said: “It is a fantastic achievement to make the shortlist of these national awards, never mind to be highly commended and we couldn’t be more delighted.

“It is testament to the high quality work of the planning team and our client base that we have at Ward Hadaway. It’s very much a team effort and we are delighted to be recognised at a national level.

The legal firm’s success follows a strong year for its Property team which was named UK Regional Law Firm of the Year for Real Estate in the Legal 500 Awards 2017.

The team has also continued to attract new clients and build on its leading position after seeing demand for its work rise by 20 per cent.

Its specialist “Plot Sales Team” acts for many of the UK’s leading housebuilders, advising them on the sale of newly completed homes and on part-exchange transactions.

The team successfully completed the sale of 3,336 new homes in the 12 months to the end of April 2017 at many new development sites across the country.

This represents over 2% of all new homes built during the period in England, meaning more than one in every 50 new houses in the country has seen Ward Hadaway involved in its sale.

The TOP service has also recently been shortlisted in the British Legal awards, organised by Legal Week in the Best Use of Technology category.