The search has begun today to find the fastest growing privately-owned companies in Yorkshire as we launch the Ward Hadaway Yorkshire Fastest 50 for 2018. 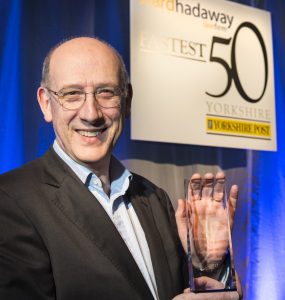 The awards will highlight the success of companies across Yorkshire which are not only flying the flag for business, but are vital to the region’s economic health in challenging times.

Jamie Martin, Managing Partner at Ward Hadaway, said: “There is no doubt that the last few years have been a time of particular challenge for business, not least because of the uncertainty around Brexit.

“There have been issues, most acutely felt by SMEs, on accessing the finance needed to invest in training, recruitment and new technologies. Our engineering and construction industries have struggled to fill a growing skills gap and many sectors are now grappling with cyber crime, a digitised marketplace, as well as changes to data protection.

“What is clear from the companies in this region that we have been involved with is that they are defying Brexit uncertainty with an upbeat outlook and that is why our support for the region’s business community is even more important this year.

“The Ward Hadaway Yorkshire Fastest 50 is our way to celebrate the businesses that keep this region thriving. They are the heroes of the Yorkshire economy and the ones projecting a story of sustained growth in tough times through innovation, efficiency and skills.

“We are seeing companies emerging that are more efficient, productive and competitive than ever before and they are committed to driving the economy forward as we all face up to the challenges and opportunities of the post-Brexit future.”

Firms on this year’s list will be hoping to emulate the success of Hisense UK, which received the award for the overall fastest growing business at the 2017 awards.

This process will create a definitive list of the 50 fastest-growing companies in Yorkshire which will be published at the end of next month.

Then, in March at a special event, awards will be handed out to the fastest-growing small, medium-sized and large businesses, for companies with annual turnover of between £1m and £5m, between £5m and £15m and turnover of more than £15m respectively.

One of those three winners will then receive the accolade of being crowned Yorkshire’s overall fastest growing business for 2018.

This is the eighth time that the Ward Hadaway Yorkshire Fastest 50 has taken place, and the event has become a firm fixture in the region’s business calendar.

2018 marks a very special year for the firm as it is celebrates 30 years in business, with a decade in Leeds and six years in Manchester.

Philip Jordan, a Partner in the Company and Commercial team at Ward Hadaway’s Leeds office, said: “When we initially set out on our Yorkshire Fastest 50 journey, it was to send a message to everyone about the capability, resilience and strength of the region’s business community and to emphasise our commitment to Yorkshire.

“A decade on in Leeds and we are delighted to be joining forces again with The Yorkshire Post to launch the 2018 Awards.

“It is the vision, determination and considerable ability of businesses such as those found in the Ward Hadaway Yorkshire Fastest 50 which has, in many ways, been the driving force for our own growth in the region, reinforced by our 10 years in the region.

“The event does a terrific job of highlighting and celebrating the high-achieving companies which do the region and the country proud and we are looking forward to seeing which businesses and which sectors have prospered most in recent years.”

Over the last eight years, the Yorkshire Fastest 50 awards have attracted some of the biggest names in business and politics.

Over the past few years, we have had guest speakers, including Ed Balls, who was Labour’s Shadow Chancellor at the time, Transport for the North chairman and former CBI director general, John Cridland. And last year the keynote speaker was Larry Gould, CEO of thebigword.

This year’s Yorkshire Fastest 50 guest speaker will be announced next week.

Greg Wright, deputy business editor of The Yorkshire Post, will speak at this year’s Ward Hadaway Yorkshire Fastest 50 Awards ceremony in March, where winners from the final 50 will be revealed.

He said the aim was to celebrate excellence across the business community.

He added: “The Yorkshire Post is proud to be on board once more for the Ward Hadaway Yorkshire Fastest 50 and we look forward to working together once more.

“The awards recognise businesses that are achieving growth and contributing to the overall success of the region.

“Ward Hadaway’s role in backing and organising the Yorkshire Fastest 50 right from the start has been essential and we are grateful for their continuing support in 2018.”