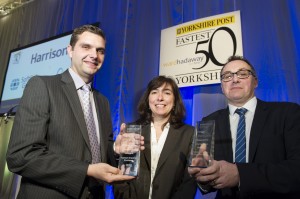 S Harrison Group has grown from a small local building company originally established in 1952 to become one of the UK’s leading independent property developers responsible for a raft of projects right across the North and the Midlands.

Ann Scott, Managing Director of S Harrison Group, said: “It’s fantastic to win these awards but it was a real surprise.

“It’s down to teamwork. We have a fantastic team that is very stable and has grown steadily through times of recession and we have a good reputation which has seen us through a difficult period.

“We try to grow steadily but we are very conscious of making sure it’s consistent growth because property can be quite up and down but we have a very stable approach.

“This kind of award is great because you are seen against your peers. It’s good that it’s based not only on turnover but also being consistently profitable because that is the key.”

S Harrison Group won the Fastest Growing Large Business title ahead of second placed online payment and ticketing specialist ESP Systex, from Hull, and third placed David Wood Baking, which is based in Leeds and makes a range of frozen ‘bake off’ and craft bakery products.

S Harrison was not the only winner at the awards, organised by Top 100 UK law firm Ward Hadaway in association with The Yorkshire Post.

Wakefield-based IT company SoftSols Group was named the Fastest Growing Small Business in Yorkshire for 2015.

The company specialises in supplying Computerised Maintenance Management Systems (CMMS), which are used by customers ranging from large retailers and hospitals to oil, gas and utilities, manufacturing and maintenance contractors. 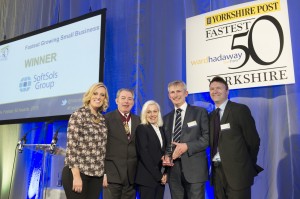 David Hipkin, Managing Director at SoftSols Group, said: “It was a complete surprise to win. Yorkshire is a big patch and the awards are across all industries so we were not expecting to pick an award up.

“The staff will be delighted because the key to software is people and this award is testament to their hard work. Without them, we’re nothing.”

Mike Danby, Chief Executive Officer of the Advanced Supply Chain group, said: “It’s great to win this award and to have external recognition for what we do. 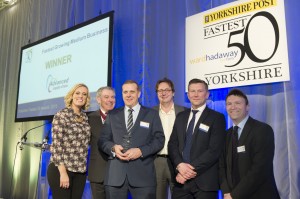 “I think the reason for our success is that we have an end to end offering – we do everything instead of just a part of the process. We go from the manufacturers to the customer.”

Advanced Forwarding won the award ahead of last year’s Fastest Growing Medium-Sized Business, automotive component seller Auto Silicone Hoses of Mirfield, who were second, and third-placed Innserve, which is based in Tadcaster and supplies, installs and maintains beer and soft drink dispenser systems.

The winning companies and the runners-up were revealed before an audience of more than 200 people, including Fastest 50 company representatives, Yorkshire business leaders and the Lord Mayor of Leeds and the Lady Mayoress (Councillor David Congreve and Janet Harper JP) at Aspire in Leeds on Friday 20 March.

BBC Breakfast business reporter Steph McGovern gave the keynote speech at the event, commenting on the improving state of the economy both across the UK and in Yorkshire and on the challenges which businesses still face such as skills shortages.

The Yorkshire Post Deputy Business Editor Greg Wright introduced the awards, which reward profit-making privately-owned companies and organisations in the region which have shown the strongest annualised sales growth over recent years.

Researchers at Bradford University School of Management compiled the Yorkshire Fastest 50 list for 2015.

Jamie Martin, Managing Partner at event organiser Ward Hadaway, said: “Growing businesses are the lifeblood of a successful regional economy and, as the Yorkshire Fastest 50 for 2015 demonstrates, this region has some of the very best.

“As a Northern law firm for national business with offices in Leeds, Newcastle and Manchester, we have a real stake in the continuing success of companies across Yorkshire so it is terrific to be able to highlight and celebrate their achievements.

“The dedication, determination and sheer hard work of the award winners and indeed every company in the Yorkshire Fastest 50 is a great example for us all to follow as we look to continue the economic recovery.”

The Yorkshire Fastest 50 2015 roll of honour

Watch a video of the awards highlights here


For a special eight-page supplement about the Yorkshire Fastest 50 for 2015, please click here.