THE guest speaker for the 20th edition of the annual Ward Hadaway Fastest 50 Awards is doubly qualified for the role. 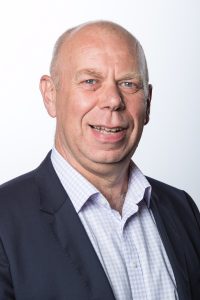 Not only is Andrew Hodgson (pictured) a key figure in the North East business world in his role as chair of the North East Local Enterprise Partnership (LEP), but as chief executive officer of Wallsend-based subsea engineering specialists Soil Machine Dynamics (SMD), he is also a past winner at the Fastest 50 Awards.

Mr Hodgson will talk about his experiences as a previous winner, the challenges of running a fast-growing business and the general outlook for the

North East economy at the Ward Hadaway Fastest 50 Awards 2017 in October when the fastest growing companies from across the North East will be revealed.

As chief executive officer at SMD, Andrew Hodgson is a leader in subsea engineering and in recent years has been awarded three Queen’s Awards for Industry.

He is currently chair of industry body Subsea North East, a board member of Subsea UK and a Trust Board member for the International Centre for Life.

Mr Hodgson also named North East Business Executive of the Year in 2012, is a former EY Entrepreneur of the Year and was awarded the OBE in 2015 for services to manufacturing and the North East economy.

He has been chair of the North East LEP since January 2016, having previously served as vice-chair of the organisation.

Mr Hodgson will be talking about his work with the LEP and at SMD to representatives of the North East’s fastest growing companies, business and political leaders at the Ward Hadaway Fastest 50 Awards 2017 at BALTIC, the Centre for Contemporary Art in Gateshead, on Friday October 6.

The awards highlight and celebrate the privately owned, profit-making businesses in the North East which have grown their turnover by the largest amount in recent years.

Speaking about his forthcoming appearance, Andrew Hodgson said: “Growing companies are at the heart of the region’s economy so I am thrilled to be asked to be guest speaker at the Ward Hadaway Fastest 50 Awards which have done such a terrific job in highlighting and celebrating business success over the years.

“Having won Fastest 50 awards in the past, I know from personal experience how valuable they are in terms of raising the profile of the winning companies, recognising the efforts of the people who work in them and in spreading the message about what a great place the North East is to do business.

“I am really looking forward to this year’s event, to finding out the pace-setting companies from across the region in 2017 and to enjoying the awards from a different perspective.”

Colin Hewitt, Partner and Head of Commercial Law at Fastest 50 organisers Ward Hadaway, said: “We are delighted that Andrew has accepted our invitation to be the guest speaker at the Ward Hadaway Fastest 50 Awards for 2017.

“With this being the 20th time that the awards have been held, we wanted our guest speaker to embody all that is best in North East business and Andrew certainly fits that bill.

“He is a hugely respected figure, not just for his work in this region at the LEP and with SMD, but also on a national level as a leader in the UK’s subsea industry.

“I am sure he will get a great reception from the audience at the awards who will be interested to hear about the LEP’s plans to help grow the North East economy further and, of course, what it’s like to be a Fastest 50 winner.”

One of these three award winners will then be crowned the North East’s overall fastest growing business for 2017.

The first opportunity to discover those companies in contention for the awards will happen next month when The Journal publishes the full A-Z list of the 50 fastest growing companies in the North East for 2017.

The list is currently being compiled by our researchers using publicly available data from Companies House and independently verified.

It is from this Fastest 50 list that the eventual winners of the awards will be drawn and revealed on October 6.