THE man dubbed "the most powerful civil servant in the North" has been revealed as the guest speaker for the Ward Hadaway Greater Manchester Fastest 50 Awards 2017. 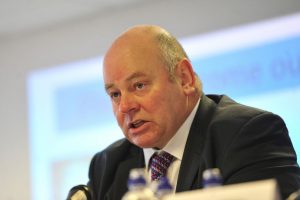 Eamonn Boylan (pictured), chief executive of the new Greater Manchester Combined Authority, will deliver the keynote speech at the event, which is organised and sponsored by law firm Ward Hadaway and celebrates the achievements of Greater Manchester’s fastest growing companies.

Mr Boylan took up his post this month after seven years as chief executive at Stockport Council.

His new role will see him work closely with the winner of next month’s Greater Manchester Mayoral election as the GMCA looks to use newly devolved powers which include a £300m housing fund, new planning powers to encourage regeneration and development and more control over local transport, including long-term government budget and bus franchising.

He has lived in Manchester since 1978, when he came to study English and American Literature at Manchester University.

The awards highlight and celebrate the privately owned, profit-making businesses across Greater Manchester and surrounding areas which have grown their turnover by the largest amount in recent years.

Speaking about his forthcoming appearance, Eamonn Boylan said: “I’m delighted to have been invited to give the keynote speech at the Ward Hadaway Greater Manchester Fastest 50 Awards for 2017.

“Business has a huge part to play in making the most of the opportunities which have been presented to us with the devolution of powers to Greater Manchester so I am looking forward to discussing this with the audience at the awards.

“The Ward Hadaway Greater Manchester Fastest 50 is an excellent way to highlight and celebrate the businesses who are helping to put the region on the map and creating jobs, boosting prosperity and attracting investment here.

“These qualities are essential in pursuing the ambitions we all share to develop Greater Manchester over the coming years so I am really looking forward to the awards and finding out which companies are setting the pace when it comes to expanding their businesses.”

“I am sure the awards audience will be very interested in hearing what Eamonn has to say about the devolution agenda and how business fits in to the vision for the future of Greater Manchester.”

This will be the fourth year that the Ward Hadaway Greater Manchester Fastest 50 Awards have taken place.

One of these three award winners will then be crowned Greater Manchester’s overall fastest growing business for 2017.

The first opportunity to discover those companies in contention for the awards will happen at the start of May when the full A-Z list of the 50 fastest  growing companies in Greater Manchester for 2017 is published.

It is from this list that the winners of the awards will be drawn and revealed on May 19.