A COMPANY which has become one of the UK's leading sellers of refurbished computer equipment has received a six-figure funding boost.

RefurbThat Ltd, which is based in Cramlington, Northumberland, has received a total of £550,000 worth of investment backing – £400,000 from private equity firm Hamilton Capital and existing investors and £150,000 from the Finance for Business North East Angel Fund, which is managed by Rivers Capital Partners, who were advised by Ward Hadaway on the investment. 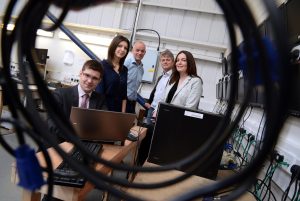 RefurbThat is a Microsoft Authorized Refurbisher, one of only a few in the UK. The company takes in used computers from Europe, the UK, and the United States and then carefully transforms them into ‘like new’ professionally-refurbished PCs.

Each RefurbThat computer is sold with genuine Microsoft software preinstalled and has passed rigorous multi-point checks before it is put up for sale.

The company says that this means customers get a “like new” out of the box computer at up to 75% less than the price of an equivalent new model.

RefurbThat will use the funding to invest further in its stock levels and to provide additional working capital as it looks to continue expanding its turnover towards around £7m in the next three years.

The company currently employs eight full-time staff with a number of part-time contractors and expects to have around 20 full-time staff by the end of next year as it grows the business.

Mark Harrison, managing director at RefurbThat, said: “The refurbished computer market is really taking off as people realise they can get a high quality PC or laptop which gives them just as good an experience but at a considerable saving to buying from new.

“As one of the very few Microsoft Authorized Refurbishers in the country, customers know that the product they get from us is genuine and has passed a series of tough tests to ensure they are getting a high quality computer.

“The investment from Hamilton Capital, the Finance for Business North East Angel Fund and our existing investors, will make a major difference to the amount of stock which we can hold and the number of customers who we can supply as we look to further expand the business across the North East and nationwide.”

Andrew Lapping, Partner at Hamilton Capital, said: “The market for refurbished computers is substantial and continues to grow and RefurbThat is a very well run company with a reputation for quality and integrity that is vital in this market.

“From what I have seen and with the investment it has secured, RefurbThat has a real prospect of becoming a dominant player in the UK market.”

“At a time when many household and business budgets are still tight, ways for companies and organisations to make savings on their outgoings are very much sought-after so RefurbThat’s offering is an attractive proposition in a range of consumer and business to business markets.

“This, combined with the company’s impressive track record so far and its ambitions for growth, meant that we were very happy to invest in the business on behalf of the North East Angel Fund.”

Imogen Holland, Corporate Partner at Ward Hadaway, who led the firm’s team, said: “We are delighted to have assisted Rivers Capital Partners on this latest investment from the Finance for Business North East Angel Fund.

“RefurbThat operates in a sector with a lot of growth potential and has a national reach as well as an important seal of approval for the quality of its offering.”

Ward Hadaway has previously advised Rivers Capital Partners on over 35 investments from the Finance for Business North East Angel Fund.

The Finance for Business North East Angel Fund invests in start-ups and existing businesses with growth potential in the region.

It forms part of the £125m Finance for Business North East investment fund established to provide debt and equity funding to SMEs based in North East England.