JUDGES in divorce cases are increasingly prepared to get tough with husbands or wives who don't stick to their settlements, a leading law firm has warned.

Expert divorce solicitors at Ward Hadaway say that the courts in England are not holding back from taking action against those who don’t abide by rulings – including sending people to prison.

The warning from the UK Top 100 law firm comes in the wake of a case which saw a property tycoon given a six-month jail sentence for failing to pay his wife the £1 million he owes her in maintenance.

However, he failed to pay anything, claiming that he was bankrupt despite his wife’s allegations that he was carrying on a “champagne lifestyle”.

The husband had been given several opportunities by judges to provide evidence that he was penniless during the long-running court proceedings between the couple, but had failed to do so.

Passing sentence on the husband, the judge in the case, Mr Justice Moor, said that there had “been a flagrant and deliberate contempt over a very long period of time” by the husband as he had not provided full and frank disclosure of his financial circumstances, despite being ordered to do so on several occasions.

The husband, who was representing himself at the hearing, asked the judge for one last chance to provide the evidence ordered by the court, but this did not succeed. 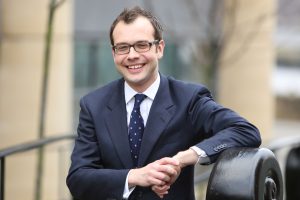 Theo Hoppen (pictured), Associate in the Family and Matrimonial team at Ward Hadaway, says the case may mark a change in the court’s approach to spouses who refuse to comply with court orders.

Theo said: “Family lawyers are well aware of the sanctions the court can impose for non-compliance with an order, however, it is very rare for a party to be sent to prison for contempt of court.

“Judges are usually reluctant to use this punishment as it is seen as too draconian. Some clients feel, therefore, that the courts can be too lenient on wayward spouses who do not comply with court orders. It may well be that judges are set to clamp down on litigants who breach orders.

“If this is a taste of things to come, it could have quite a profound change on divorce cases, particularly those which are closely contested and where there are substantial assets at stake.”

The family team at Ward Hadaway regularly acts in divorce cases involving substantial and complex assets, including sometimes acting against spouses who refuse to provide full and frank disclosure of their assets.

Theo Hoppen said: “During these difficult economic times parties often plead poverty and claim their business is failing or that the value of their assets has plummeted.

“If these claims are not fully substantiated or if lawyers representing the other spouse uncover evidence to the contrary, the consequences for the spouse concerned could be more than just financial.

“While this latest case is an extreme example, it does demonstrate that courts are not afraid to impose custodial sentences on people who disregard rulings in divorce cases.”

He explained: “In Ward Hadaway’s family team, we are seeing more demand for these services and we are well-versed in getting to the bottom of a spouse’s finances, being able to draw on the expertise of other experts in the firm to assist us in this, such as our Pensions team.

“In addition, we have excellent relationships with forensic accountants and valuers who can help us to get a true picture of the other party’s finances – so honesty may well be the best policy for those involved with divorce.”