The sun shone and sausages sizzled at Ward Hadaway's recent fundraising BBQ in aid of The Booth Centre in Manchester. 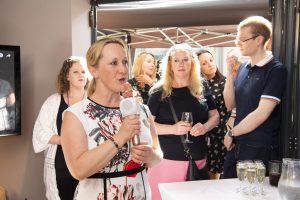 Around 70 members of Manchester’s business community enjoyed a good meal for a great cause and raised hundreds of pounds in the process recently.

The BBQ event, which took place at Dukes 92 in Castlefield, raised over £800. Donations of 64 jars of coffee and 158 pairs of men’s socks which had been specifically requested by the centre were also collected.

Amy Hinks from the Booth Centre attended and spoke about the work they do to help people who are homeless or at risk of homelessness in Manchester. This allowed those attending to get a better understanding of the work of the centre.

Uniquely Manchester, which sells arts, crafts and other gifts, all with a Manchester connection had a pop-up stall at the event and donated a prize for the raffle.

Jodi Seddon, Hollie Walsh, and Laura Andrew from the Ward Hadaway team also spoke about their involvement with the charity, which has included a sleepout and volunteer day.

Rachel Birks, Partner at Ward Hadaway, said: “It was a fantastic turnout from the business community in Manchester and was very well received by everyone. There was also a raffle with some fantastic prizes which were kindly donated by local businesses and organisations.”

“As a business, it’s vital we support the local community in which we all live and work. Homelessness is a really visual issue in Manchester at the moment.

“The Booth Centre provides the basics of life for people like hot drinks, freshly cooked meals and a place to get a shower, but it is also more than that. It is a real community where people can learn skills to help gain employment and take part in activities which develop self esteem. I would really encourage other businesses to get involved with the Booth Centre.”

Ward Hadaway is now planning its next fundraising mission for the Booth Centre, which is to put forward a team to take part in the annual Sleepout in the grounds of Manchester Cathedral on the night of Friday, 9 November.

Rachel added: “Last year 400 people from Manchester took part with a huge £120,000 raised, vital funds for a charity that provides hot meals for 250 people a week.”

Registration for the 2018 Manchester Sleepout is now open. Contact billy@boothcentre.org.uk