BREXIT is set to play a key factor in the future size and shape of Yorkshire's economy, according to the organisers of the region's leading awards for fast growing businesses.

Law firm Ward Hadaway, which organises the Ward Hadaway Yorkshire Fastest 50, says that the effects of the UK’s forthcoming departure from the EU is likely to have a considerable impact on future editions of the awards scheme, which recognises and celebrates the fastest-growing privately-owned companies from across the region.

The winners of the 2017 Ward Hadaway Yorkshire Fastest 50 Awards will be announced this Friday (March 17). 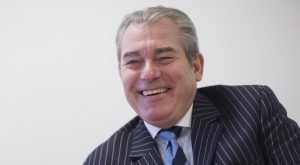 With Prime Minister Theresa May poised to begin the formal process of withdrawing from the EU, Ward Hadaway Partner Philip Jordan (pictured) says the momentous decision to leave the EU is likely to make its mark in a range of different ways.

Philip said: “Whilst the referendum result occurred a little too late to have a major effect on the 2017 Ward Hadaway Yorkshire Fastest 50, I think we can say with quite a degree of confidence that in the future, Brexit will see its influence felt as the effects of the UK’s withdrawal permeate through the national and regional economy.

“Immediately following the Brexit vote last June, there was some concern and some volatility in the market as companies and consumers alike tried to figure out just what it meant to them.

“However, despite that initial uncertainty and slowdown, things picked up perhaps quicker than many anticipated as businesses adopted a ‘get on with it’ approach and pursued their growth and investment plans.

“The fall in the value of the pound has given Yorkshire’s many exporters an opportunity as their goods and services are cheaper to overseas buyers and therefore even more attractive an option than before.

“The other side to that opportunity is that the cost of importing goods into those businesses has risen considerably and increased import costs have fed a rise in UK inflation.

“The nature of our future trading arrangements with the EU and the rest of the world will prove vitally important to the UK economy, feeding through to Yorkshire and our fast-growing companies here.

“Many of the businesses named in previous Ward Hadaway Yorkshire Fastest 50 lists built their success on exporting their goods, services and expertise around the world so it will be interesting to see how Brexit affects them and their fortunes and those listed in the 2017 edition.”

Philip, who has advised a varied range of clients worldwide for more than 30 years, emphasised that while the twists and turns of the UK’s negotiated exit from the EU would have an effect on Yorkshire’s economy and the growth of its businesses, Brexit would not necessarily decide the fate of the region’s companies – for good or ill.

He explained: “As anyone in business will know, there are challenges at every stage for every company and Brexit is just another challenge.

“When we launched the Ward Hadaway Yorkshire Fastest 50 in 2011, the UK was still recovering from the after-effects of the global financial crisis and, although we had climbed out of recession, times were still pretty tough.

“However, in 2011 we still saw a raft of high quality companies managing to profitably grow their businesses year on year and it has been the same with every Yorkshire Fastest 50 since then.

“There is no doubt that Brexit has the potential to pose a major challenge to all kinds of businesses over the coming years, but there are also likely to be opportunities out there as well.

“In the end, it will be the companies who respond quickest and adapt best to the new realities of post-Brexit Britain who will prosper – and who will make up the Ward Hadaway Yorkshire Fastest 50 in years to come.”

All eyes in Yorkshire will be on Aspire Leeds this Friday (17 March) as the winners of the 2017 Ward Hadaway Yorkshire Fastest 50 Awards are announced.

Awards will be presented to the fastest growing small, medium-sized and large businesses, for companies with annual turnover of between £1m and £7.5m, between £7.5m and £15m and turnover of more than £15m respectively.

The Ward Hadaway Yorkshire Fastest 50 is compiled by independent economic researchers who analyse company financial figures to create a run-down of the privately-owned, profit-making companies who have seen the biggest annual expansion in their turnover in recent years.