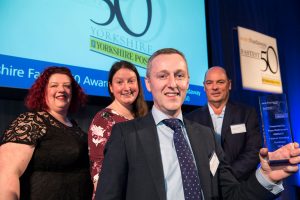 The Leeds-based company won the awards for Fastest Growing Large Business and Overall Fastest Growing Business at the event, which recognises and celebrates the fastest growing privately-owned companies across Yorkshire.

Pure Retirement is a specialist mortgage lender which serves the equity release market to help people plan for retirement.

Established in 2014, it rose to the top of this year’s list of fast-growing businesses with an average turnover growth of 104.8%.

The business, which helps homeowners to unlock the value tied up in their property by converting it into a tax-free lump sum, has capitalized on the equity release market to deliver its record-breaking growth.

Jonathan Simpson, Financial Director of Pure Retirement in Leeds, said: “The fact we only started trading in 2014 is an achievement in itself and so we were all a little bit surprised to win not one, but two awards.

“We just go about our business and try to do the best for our customers and I believe our success is really down to our people. We have a fantastic group of really skilled people working with us. We’re really delighted to win because we are in a fast-growing sector and to come out on top in Yorkshire is really something else.

“Our priority now is to get more funding so we can do more innovative things with our products. We want to work on educating our advisors further because there’s so much need for equity release now. We want to get that message out there and get more people into the market so we can meet that need.”

Pure Retirement was not the only winner at the awards, organised by Top 100 UK law firm Ward Hadaway and supported by The Yorkshire Post.

Live events company Production Park from Wakefield, won the award for the Fastest Growing Medium-Sized Business, for companies with an annual turnover of between £5m and £15m.

The business, which is based in South Kirkby provides 300,000 sq ft of live events space under one roof and has worked with stars such as Beyonce and Rag ‘n’ Bone Man.

Ria Forsyth, admissions and commercial officer at Production Park in Wakefield, said: “We were overwhelmed to be just nominated for the award, so to be a winner, we are all over the moon. We couldn’t be any happier and it’s nice to be recognised. Every year we’re getting bigger and because we’ve won this award, we know we’re heading in the right direction.”

Sheffield-based IT company Azzure IT was named the Fastest Growing Small Business in Yorkshire 2018 for the second year in a row in the category for companies with an annual turnover of between £1m and £5m.

The company is rated by software giant Microsoft as the leading Microsoft Gold Partner in the UK and has also launched its own IT training skills academy to mentor and train people.

Craig Such, managing director and owner of Sheffield-based Azzure IT, said: “To win in the Yorkshire Fastest 50 Awards last year was a great achievement and we were really pleased with that, but to come back a second year and to win again, we’re really over the moon about it. We’re ecstatic.

“The key to our success is our people. We’re a people business and although we provide technology, we couldn’t have achieved this award without each and every one of our staff. It is credit to all the hard work and effort our people put in.

“We’re now going to focus on our growth. We recently added a £2 million pound investment from the Northern Powerhouse Fund so that’s going to fuel our ongoing growth. We’re already at the forefront of what we do in the UK and we are now going to continue to push into other markets and other Microsoft Dynamics products as well.”

The winning companies and runners-up were revealed before an audience of 280 people, including Fastest 50 company representatives and Yorkshire business leaders, at Aspire in Leeds on Friday, March 16th.

Shadow Secretary of State for Brexit, Sir Keir Starmer, was the special guest at the event and gave the keynote speech.

In his speech, Sir Keir spoke about his ‘spoft spot’ for Yorkshire and Leeds and how great it was to be back in a city that was close to his heart, having attended Leeds University.

He expressed how much the city has changed and how far it has come in recent years.

In his speech, he acknowledged the number of smart manufacturing companies in this year’s Yorkshire Fastest 50 list, before moving on to talk about the growing financial services and legal services sector in Leeds. He said he was impressed by the ‘great innovation and creativity’ from companies in this year’s list and added that it was a sign of ‘success in uncertain times’.

On Brexit, Sir Keir talked through what has happened so far, where he sees the UK heading and also what that means for Yorkshire businesses.

He said: “My strong sense from all the discussions I’ve had with businesses is that there is near unity about what you and the wider community want.

“The first is certainty. No businesses want uncertainty and it really affects investment. Hence the plea for knowing what is going to happen in March 2019 and knowing as much as possible about what’s going to happen after that.

“The second is businesses dealing in manufacturing or goods. Their message is pretty clear, we certainly don’t want tariffs, we don’t want extra burdens on the border and want to protect our supply chain and we also don’t want to diverge on standards.

“For services, the message is not dissimilar and we need common standards, regulation and we need to be on a level playing field so we can provide our services to Europe and the rest of the world.

“Nobody I have spoken to is particularly keen on deregulation or pulling away from workplace rights, food safety standards etc. Almost all businesses are saying that we like the fact that we are operating to good high standards.

“Lastly businesses are saying to me that trade with the rest of the world is a good thing, the more of it the better, but not at the expense of our trade with Europe and also a very strong message about skills and talent and having the ability to have people come from other countries to provide the skills and talent that’s needed.”

Sir Keir ended his speech by inviting businesses in the room to talk to him after his speech about Brexit.

Ward Hadaway Partner Philip Jordan talked about the firm’s involvement in the awards, which were first held in 2011, and about Ward Hadaway’s growth in Yorkshire over the past decade.

Executive Partner for the Leeds office, John Murray, then introduced Keir Starmer to the stage.

Jamie Martin, managing partner at event organiser Ward Hadaway, said: “This is the eighth time which we have held these awards and they never fail to be inspiring occasions that bring out the best in Yorkshire’s businesses.

“As a Northern law firm for national business with offices in Leeds, Manchester and Newcastle, it’s great to see so many companies driving the region’s economy forwards.”