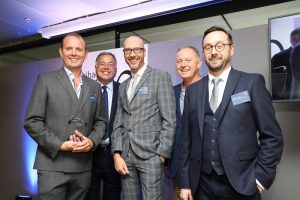 NBT Integrated Services provide stock control through the use of storeroom management and intelligent vending machines. The family-run firm, which was established 110 years ago, rose to the top of this year’s list of fast-growing businesses by growing its turnover by on average more than 78% a year over the past three years.

The business provides supplychain management for manufacturing sites and carries out up to 40,000 transactions a month.

“It’s incredible to think that for 110 years we have supply-chain managed North East companies. My great-grandfather managed electrical spares for the trams that ran around Newcastle. My greatgrandmother took over the business from him with her three daughters and managed lighting and telephones for the coal mines.

“When I took over from my dad, the business was in a much trickier market and the recession was incredibly difficult. All I wanted to do was ensure we moved on as a business so that we might have the opportunity to pass it on to the fifth generation.

“This award is an amazing accolade for the team around me. I recognise now how tough growth is and I’m truly thankful for them sticking by me, and developing most of my often random ideas. There were some brilliant people and companies in the Fastest 50 list, so I’m just humbled to be here.”

NBT Integrated Services won the Fastest Growing Medium Business Award – for companies with an annual turnover of between £5 and £15m – ahead of SLW (Holdings) Limited of Sunderland in second place and Stockton-on-Tees’ IDEC Technical Services Ltd in third.

NBT Integrated Services was not the only winner at the awards, organised by Top 100 UK law firm Ward Hadaway and supported by The Journal. END., have appeared in the Fastest 50 for the third year in a row and this year won the award for the Fastest Growing Large Business, for companies with an annual turnover of over £15m. 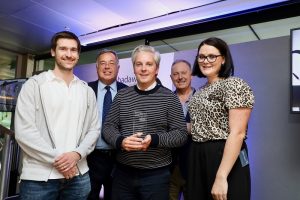 END. won the award for the Fastest Growing Large Business

Founded in Newcastle in 2005, the retail business announced just last week that it saw its turnover exceed £100m for the first time and there has been a 42% increase in pre-tax profit. It also opened its third high street store.

Mark Fleetwood, Finance Director of END. clothing.com, said: “It’s a huge credit to our team, their focus, creativity and energy that we have been able deliver such strong results. It’s great to see this recognised through this award.”

Another family business was named the Fastest Growing Small Business with an annual turnover of between £1m and £5m. The senior management team at Boldon-based Total Resources (UK) Limited possess more than 150 years of knowledge and experience between them. 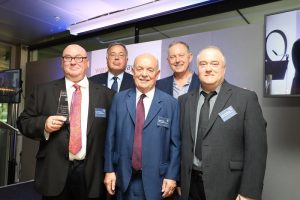 Les Thompson, Managing Director and Owner, said: “What a fantastic achievement in today’s climate which is all down to good staff, everyone working together, everyone pulling together and providing a fantastic service for our customers.

“This award is a fantastic one to have for the company’s CV because we can say to potential customers, look what we’ve achieved, so go on give us a try.”

The winning companies and runners-up were revealed before an audience of 250 people, including Fastest 50 company representatives and North East business leaders, at BALTIC Centre for Contemporary Art, Gateshead on Friday, October 12.

This year’s list contained 17 companies from around the region who had been in the Fastest 50 before, but it also threw light on 33 companies who were not in the 2017 list.

The Journal’s Business Editor Graeme Whitfield introduced the awards, which reward profit-making privately owned companies and organisations in the region which have shown the strongest annualised sales growth over recent years.

Ward Hadaway Senior Partner Jamie Martin then talked about the Top 100 law firm’s awards, now in their 21st year, and about Ward Hadaway’s growth in the North East over the past three decades.

Jamie, said: “The region is a tremendous place to do business, to invest and innovate, but we recognise that it has been a challenging and uncertain time for North East businesses.

“Brexit is just six months away and companies are finding it difficult to invest and grow; planning ahead is difficult. To see so many companies do just that speaks volumes about the commitment of our business community to grow successful and dynamic companies.”

Global technology expert and Group Information Services Director at Northumbrian Water, Nigel Watson, was the special guest at the event and gave the keynote speech.

In his speech, he acknowledged the achievements of companies in this year’s North East Fastest 50 list, before moving on to talk about how the region is at the forefront of innovation.

He said: “There’s something in this region about how friendly it is, but also a humility and an openness to ideas, a sense of collaboration and a sense of wanting to be part of something bigger – and that is really a key attribute we should all value.”

He expressed how politicians and business people could look to the North East for clues on how we can put the country back together again.

He said: “In the times that we are facing right now, allowing customers and partners into the kitchen and being open and transparent is definitely a great quality to have.”

Nigel ended his speech by inviting businesses in the room to the next Northumbrian Water Innovation Festival in summer 2019.

“When it comes to ideas and innovation, it is important to have a central idea. For me it was the annual festival, but the defining characteristics are that it is open and it is meaningful because we take those ideas forward and progress them and it is fun.”