Newcastle Falcons have unveiled Ward Hadaway as an Official Partner to the club for the next two seasons.

The Top 100 law firm, which has offices in Newcastle, Leeds and Manchester, will become the exclusive legal services provider to the club and will be present on the back of the home and away shirts until 2017. 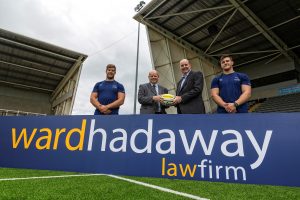 The sponsorship marks a return to the club for Ward Hadaway who were previously official partners from 2006 to 2008.

Under the new agreement the firm will undertake all legal services for the club and will benefit from exclusive events, hospitality and player access.

Ward Hadaway forms part of an exclusive group of Official Partners who will work with the club over the next few seasons.

Ward Hadaway is one of the UK’s Top 100 law firms and employs more than 450 people across the North in offices in Newcastle, Leeds and Manchester.

It is home to acknowledged national experts in a wide range of disciplines and provides commercially-focused legal advice to regional, national and international clients from the private and public sectors, as well as looking after the personal interests of a number of private individuals.

“We are delighted that Ward Hadaway has once again partnered with Newcastle Falcons for the next two seasons. The firm has an experienced and very talented senior management team that we are all looking forward to working with.

“The next two years represent a significant opportunity for the club with the Rugby World Cup coming to the city and the fact that we have purchased Kingston Park Stadium.

“Ward Hadaway will play a big part in these opportunities via the support and advice it will provide to the club.”

“We are delighted to be back again with Newcastle Falcons – in many respects it feels like we are ‘coming home’.

“As a Northern law firm for national business, we use the strengths and assets which the region has to offer to make an impact across the country, something which we know the Falcons are also terrific at doing.

“We are really looking forward to working with all the team at Kingston Park, including all our fellow Official Partners, and to sharing in what we hope will be the success which the Falcons secure on the field over the next two seasons.”