THE findings of a report into business attitudes to the 'Northern Powerhouse' agenda back calls for a united approach to boosting the North's economies, according to a leading law firm.

Law firm Ward Hadaway, which supported independent think tank IPPR North’s report ‘Full Steam Ahead: Business attitudes towards the Northern Powerhouse’, says many of the conclusions found in the study reinforce its own experiences and feedback from businesses it advises.

And the firm, which has offices across the North in Newcastle, Leeds and Manchester, adds that the findings add further weight to the case for the North to be given more power over issues such as skills and training, transport and economic development.

Jamie Martin, Managing Partner at Ward Hadaway, said: “We got involved with this report because as a Northern law firm for national business, not only do we serve many of the businesses which the Northern Powerhouse is intended to assist, but we have a real stake in the future of the North’s economies.

“This report gives a strong and powerful voice to the North’s businesses which should be heeded not just by those in Whitehall but also across the country.

“It is very pleasing to see that the confidence in the North’s abilities and willingness to embrace positive change comes through loud and clear in every line of this report – and it is something which we share wholeheartedly.”

The report was compiled by IPPR North via a series of one-to-one interviews, an online survey and a series of round table focus groups, which Ward Hadaway hosted.

A wide range of businesses, from SMEs to major nationwide companies, took part in the research process and contributed to the final report, which has been issued today (Mon 29).

One of the key findings of the report is that a majority of business people in the North want economic development and transport devolved to larger geographic areas, rather than being handled by a small group of councils.

In particular, almost half of those surveyed say transport should be organised at a pan-Northern level.

Jamie Martin said: “This conclusion chimes in both with our thinking and our own experiences.

“Despite some recent improvements to rail services, journeys across the North – particularly over the Pennines – take much longer than they should do with services and quality lagging considerably behind their equivalents in the South East.

“As a firm, we have previously called for joined-up thinking when it comes to these issues, arguing that it is impractical and potentially harmful to deal with areas in isolation or take a piecemeal approach.

“We back the £15bn One North plan for a 16-year programme to boost transport and connectivity across the North. This is a terrific example of how the different regions in the North can work together for a common goal and it is this kind of approach which is most likely to achieve the ambitions encapsulated in the Northern Powerhouse agenda.”

The IPPR North report also flags up strong support from businesses for funding and decisions on skills and training to be devolved to a local level.

Jamie Martin said: “Skills shortages are a common challenge for many of our clients such as those in the manufacturing, engineering and housebuilding sectors and addressing this issue is of fundamental importance to continuing economic growth.

“Whilst there is some superb work being done by colleges and other training providers in this field, allowing greater local input and resources to be targeted will help them to achieve even more.”

In its conclusions, the IPPR North report underlines the importance of the North’s economy not just on a regional level but on a national level, concluding that “an unexploited North is bad for the UK”. 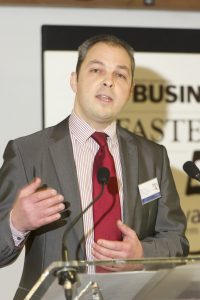 Jamie Martin commented: “”We have always believed that Northern prosperity is national prosperity and that there remains huge potential for further growth right across the North.

“We work with superb businesses across the North day in and day out and we see how ambitious they are and how much further they want to go.

“For example, the most recent round of the Fastest 50 Awards which we organise in the North East, Yorkshire and Greater Manchester to highlight and celebrate the North’s fastest growing businesses, revealed that those companies generate a combined annual turnover of more than £6bn.

“This is a significant sum not just for the North but also for the UK. With funding and willpower from Government to address some of the issues outlined in the report, this could be just the tip of the iceberg of the North’s true potential.”

Ed Cox, Director of IPPR North (pictured), said: “There is significant food for thought for Ministers, local authority leaders and companies in the contents of this report which demonstrates the real appetite for devolution held by many of the North’s businesses.”

The full report – ‘Full Steam Ahead: Business attitudes towards the Northern Powerhouse’ – can be found here.