THE Head of Intellectual Property at law firm Ward Hadaway proved to be real dynamite by walking off with a prestigious technology industry award. 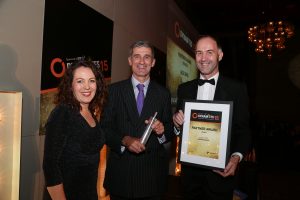 Alex Shiel was named Partner of the Year at the Dynamites 2015, an awards event honouring the finest IT and technology industry talent across the North East which was organised by North East IT network Dynamo.

Alex won the award for Partner of the Year in recognition of more than 20 years’ work supporting IT and technology companies in the region.

He started out advising entrepreneurs, businesses and organisations in the sector in the early 1990s. Alex  worked with some of the North East’s early dotcom businesses and e-commerce companies and continues to advise a wide range of businesses and individuals ranging from start-up and early stage companies to large multi-nationals.

Alex has been heavily involved in almost every initiative aimed at promoting and developing the North East tech sector, from Codeworks to Newcastle Science City and Digital Union and he also plays a prominent role in student mentoring programmes at many of the region’s universities.

For example, this year, he has helped fledgling companies including Robo Pixel Games, which specialises in creating retro-style ‘pixel art’ games and graphics.

Alex provided the company with general business start-up and mentoring advice, dealing with various legal questions on copyright and trade marks for them relating to games they are working on. He also provided advice on an investment in the business from the Finance for Business North East Angel Fund which will allow them to release their first major game in 2016.

On winning his award, Alex said: “I am honoured to receive this award, which is not just for me but is also for the team at Ward Hadaway and all the immensely talented and inventive people and companies in the North East IT sector which I’ve enjoyed working with over the years.

“Throughout my time, my main focus has always been to help clients to understand and come to terms with the legal aspects of doing business in the technology sector, matching up existing legislation with often new and untried products, developments or services.

“It has been challenging and exciting work and a real privilege to see at first hand the innovative, ground-breaking work which is being carried out in the IT and technology sphere across the North East.

“I think the industry in the region has never been healthier or more vibrant so it is a real privilege to have been given this award at a time of such rich promise.”

Alex’s award nomination was supported by Herb Kim, founder and CEO of Thinking Digital and chair of Tech North.

Jamie Martin, Managing Partner at Ward Hadaway, said: “We are absolutely delighted for Alex. He has been a fantastic asset to the firm for many years and this accolade is one which is richly deserved.

“In his work and his approach to helping clients, Alex exemplifies everything which Ward Hadaway is about and it is terrific that this has been recognised in such a way.”

The award is the third major industry accolade which Ward Hadaway has won in the last four months.

In the summer, the firm’s property team was named Property Team of the Year in the 2015 Northern Law Awards whilst earlier this month, Ward Hadaway’s Litigation team won the firm the title of UK Regional Law Firm of the Year in the Dispute Resolution category of the 2015 Legal 500 Awards.

Jamie Martin said: “Whilst winning awards is not what we are in business for, it is nonetheless very gratifying to see the expertise and achievements of our various teams and individuals to receive independent recognition in this way.”