Ward Hadaway, in association with The Yorkshire Post, has launched its prestigious Fastest 50 Awards in Yorkshire for the tenth year running.

Established in 2010, the Yorkshire Fastest 50 Awards celebrate the 50 fastest growing, privately owned companies from across the region including businesses from Bradford, Leeds, Sheffield and York. 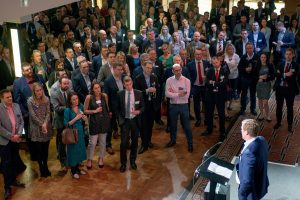 The annual awards ceremony recognises small, mid and large sized companies, rewarding them for their success, innovation and influence while growing their turnover by the largest amount over a three year period.

“Over the past nine years, we have witnessed the most innovative and forward-thinking companies who have shown competitive prowess, tenacious focus and genuine ability in what they do. They have directly contributed to the regional economy; putting Yorkshire on the map for being home to some of the UK’s most promising, inspiring and progressive companies.

“Each and every one of them have rightfully secured a spot in our Fastest 50 list and this is credit to their success, which has also created jobs in the region, driven growth and attracted national and international investment.

“In what is a special milestone year for the awards, 2020 will showcase Yorkshire’s crème de la crème of the business world and highlight how they’re driving change in both traditional industries and emerging sectors, fuelled by developments in technology and infrastructure.”

The compilation of 2020’s winners ends in an invitation-only celebratory event, hosted by a distinguished guest speaker, at Aspire in the centre of Leeds. Firms are selected and verified using publicly available information from Companies House.

In the last nine years, hundreds of companies have been listed in the Fastest 50. Over a quarter of these businesses have appeared in the list more than once. Between them, they have generated over £17billion in turnover.

Winners have included those from across manufacturing, construction, wholesale and retail sectors as well as technology, transport, business services, recruitment and waste and recycling industries.

Gareth continues: “2020 not only marks the first decade of the Fastest 50 awards but it also heralds a new era for the UK as we start to move into, and do business in, a post Brexit world.

“Despite volatile markets and economic uncertainty, Yorkshire businesses have continued to strive for success and showed that hard work, capability and a hunger to achieve really can pay dividends.

“Regardless of external events, the region continues to be a hotbed of innovation, creativity and development with record turnovers reached, rapid growth achieved, and increased employment enjoyed. Businesses across the region are thriving and it’s vital we continue to celebrate that accomplishment.”

Each year Ward Hadaway objectively compile lists of the 50 privately-owned, profitable organisations that have seen the biggest average annual growth rate in their turnover in each of the three regions. They then crown the fastest growing small, medium, large and overall company at our Awards ceremonies.

Growing businesses are the lifeblood of the economy and we want their efforts to be recognised and celebrated on a wider scale, which is exactly what the Fastest 50 does.