A North West entrepreneur who specialises in digital transformation and emerging technologies for businesses will be the guest speaker at the Ward Hadaway Greater Manchester Fastest 50 Awards 2019. 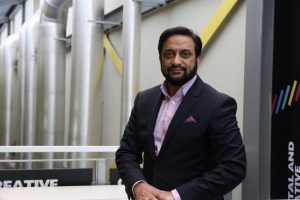 Mo Isap, the founder and CEO of IN4.0 Group

Mo Isap, the founder and CEO of IN4.0 Group, which runs IN4.0 ACCESS, an innovative industry 4.0 accelerator programme, is helping SME manufacturers start, scale and succeed in business through technology.

Mo will deliver the keynote speech at this year’s Fastest 50 Awards, which are organised by Ward Hadaway and celebrate the achievements of Greater Manchester’s fastest-growing companies.

He will talk about industry 4.0 as being crucial for business survival when he meets representatives of Greater Manchester’s fastest growing companies at the invitation-only event at the Royal Exchange on Friday,10th May.

He said: “Skills shortages and a lack of understanding of what Industry 4.0 is are the things that are holding companies back today. The rise of technology has changed the way we work and the nature of the work we do is also evolving, that’s why companies need to develop their existing workforce.

“There needs to be a strong focus on upskilling and reskilling current workers to help offset skills gaps.”

Previously group director at Hobs Studio, Mo led them in the space of four years to become one the UK’s leading providers of 3D printing, 3D scanning and AR/VR.

He was also Managing Director of MPG, a digital print and document management company which was acquired by Hobs. The business grew to become one of the largest independent digital print companies in the UK.

Mo is currently a board member of the Greater Manchester Local Enterprise Partnership, leading on schools and future skills, and he is also a board director for the Careers and Enterprise Company (CEC).

The Fastest 50 Awards highlight and celebrate privately-owned, profit-making businesses in Greater Manchester which have grown their turnover by the largest amounts in recent years. They are being backed for the first time by the Greater Manchester Chamber of Commerce and University of Salford Business School.

Speaking about his forthcoming appearance, Mo said: “I’m delighted to have been invited to give the keynote speech at the Ward Hadaway Greater Manchester Fastest 50 Awards for 2019, which celebrate the success of businesses across the region.

“Greater Manchester was the world’s first industrial city and today it is at the heart of the UK’s largest manufacturing and advanced engineering cluster. It is also home to a burgeoning tech sector which will help it become even stronger as a place to live and work.

“The Ward Hadaway Fastest 50 is an excellent way to highlight and celebrate businesses which are using technology to advance their sectors and become future leaders.

“I am really looking forward to attending the Awards and finding out how companies are developing their digital transformation plans.”

Executive Partner at Ward Hadaway’s Manchester office, Paul Johnson, said: “We are thrilled that Mo has accepted our invitation to be a guest speaker at the Ward Hadaway Greater Manchester Fastest 50 Awards for 2019.”

By the independent analysis of company financial figures, the Ward Hadaway Greater Manchester Fastest 50 identifies the privately-owned, profit-making companies which have seen the biggest average turnover growth in the last three years.

This process will create a definitive list of the 50 fastest-growing companies in the region which will be published on the Ward Hadaway website at the end of April with further coverage in the Greater Manchester Chamber’s The Business magazine.

Then on Friday, May 10th, a special event at the Royal Exchange Theatre in Manchester will see awards handed out to the fastest-growing small, medium and large businesses for companies with annual turnover of between £1m and £10m, between £10m and £30m and over £30m respectively.

One of those three winners will then receive the accolade of being crowned Greater Manchester’s overall fastest growing business for 2019.